* This post contains affiliate links, and we will be compensated if you buy after clicking on our links. 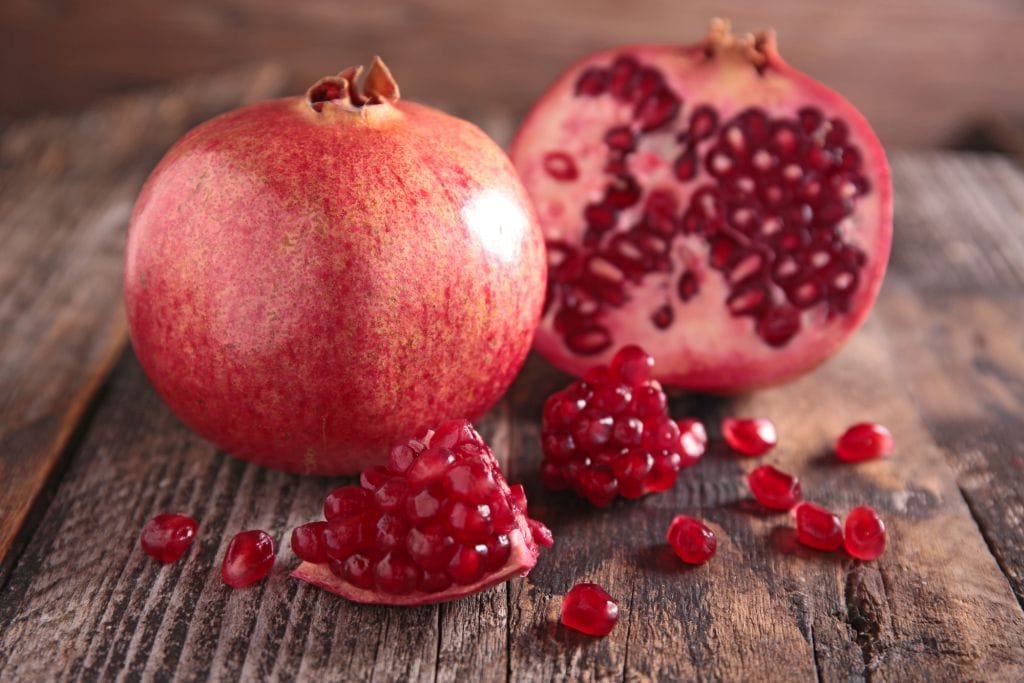 Some people are surprised to learn that fruit is good for their dogs. While it is true that the canine is primarily a meat-eater, fruits and vegetables provide a lot of important nutrients and vitamins, some of which are not available from meat. In this article, we will examine one fruit in particular. Can a dog eat pomegranate? Let’s look at the facts and find out.

According to most sources, it seems that pomegranate is safe for dogs to eat. There are some claims that it will cause a stomach ache, but there doesn’t seem to be any evidence for these claims as far as we can see. For instance, here is an article from a fairly respectable source regarding fruits that are good for dogs. Pomegranate is included in the list, primarily because of its high antioxidant content.

In fact, there is evidence to suggest that pomegranates have some medicinal value when used on canines. For instance, this study found that a pomegranate extract could be used to improve a dog’s digestive health. It does this by promoting hindgut fermentation, which will also improve their ability to digest other fruits and vegetables.

Another good thing about the pomegranate is the fact that it has antimicrobial properties. While it isn’t exactly an antibiotic, it definitely helps your body to fight off infections and microbes that might otherwise cause a problem. Thus, we can safely say that a regular intake of pomegranate could potentially strengthen the immune system.

Can Dogs Eat Pomegranate Seeds? What Can Happen?

Some fruits have seeds that can be toxic to dogs. These include the apple, the cherry, and a few others. Thankfully, pomegranate seeds are not toxic to dogs or humans. In fact, the seeds are generally considered to be the best part. Unlike most seeds, the seeds of a pomegranate are large and fleshy, giving them a meat-like consistency that dogs will probably enjoy.

That being said, the seeds are probably the most acidic part of the fruit, so exercise some caution here. The acid in question is known as punicic acid. The name might sound scary, but this isn’t a corrosive acid. In fact, punicic acid has some rather striking health benefits associated with its use.

The use of punicic acid (in humans) has proven to be helpful in the reduction of obesity. It also has anticarcinogenic properties, making it useful for the treatment and prevention of cancer. It is reasonable to assume that these benefits might also be obtained by your canine friend.

What to Do If Your Dog Eats Pomegranate?

If your dog eats a pomegranate, whether it be the flesh or the seeds, it isn’t really a problem. As we have already shown, there are even a few health benefits that dogs can obtain from a little bit of this fruit. But let’s go back to a claim that is often made by those who disagree: The idea that pomegranate will give your dog a stomach ache.

It is true that pomegranate seeds are pretty acidic. A lot of fruits have acidic juice, and this is not a big problem. However, it is possible that your dog could develop a stomach ache if they eat a large quantity of pomegranate. Therefore, we would advise you to feed your dog no more than one fruit at a time.

Now that you know pomegranates are safe for dogs, it’s time to get creative. Let’s look at a few homemade dog treats that can be made from pomegranate. Follow the links in each paragraph for the full recipe.

First, let’s look at these tapioca-pomegranate treats. They are made from tapioca flour and pomegranate juice, among several other things. These treats have the advantage of being gluten-free, and also provide a nice dose of protein via the eggs and milk included in the recipe.

Next, let’s look at these shoe-shaped pomegranate treats. This one is also made from pomegranate juice, eggs, and tapioca flour, but they have added a few other things, like oat flour, coconut oil, and honey. These come out looking like little cookies, and dogs go nuts for them.

Finally, we have these pomegranate sweetheart treats, which are made with a valentine’s day theme. This is a great recipe for those who aren’t that good in the kitchen. It has only three ingredients: Pomegranate, eggs, and oat flour. You just mix it together and mold it into a pretty little heart shape. You couldn’t ask for an easier recipe than this.

Summary: Can My Dog Have Pomegranate?

In short, there is nothing wrong with feeding pomegranate to your dog. We have researched this subject as thoroughly as we could, and we find no evidence that pomegranate is harmful to a dog. In fact, we have found quite the opposite. The occasional pomegranate is likely to benefit your dog’s health in several ways, though consumption should be limited to one fruit at a time.

As an Amazon Associate, I earn from qualifying purchases.

Keep in mind that we may receive commissions when you click our links and make purchases. However, this does not impact our reviews and comparisons. We try our best to keep things fair and balanced, in order to help you make the best choice for you.